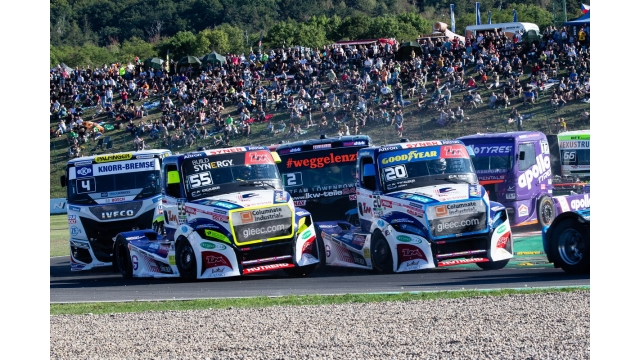 Most was marvellous. The weather was great. A lot of people came to cheer us. It was a great show at the circuit even and it was probably the most challenging weekend in Most ever, because Buggyra team was fighting in two championships here, Buggyra’s head of communications Jan Kalivoda recalled start of Buggyra pilot Aliyyah Koloc in EuroNASCAR races.

The natural elements avoided the North Bohemian circuit this time. The sun smiled on the competitors and spectators all weekend, only occasionally teased by some clouds.

On Saturday Adam Lacko in cup race 1 started from third row and took fourth place. But the real show for the thousands of Buggyra fans, whose team shirts could not be missed in the stands or in the paddock, Lacko prepared for the second run in the late afternoon.

Adam long time raced on third position behind leading pair Lukas Hahn, Jamie Anderson. At the last corner of the last lap young German made a mistake and went too wide. This manoeuvre also slowed down the Briton and Adam saw his chance. At the exit he found his place between both rivals and pushed like hell for the win. If the finish line was only hundred meters further, it could have been the first place for Buggyra. In the end Lacko lost to Anderson by just 101 thousandths of a second.

Lacko raced in third place and watched for Kiss behind him. But he still believed, it was possible to move further. And it really worked out in the last lap and the last corner. Just like two dogs fought for a bone, and a third ran away with it. Second place is wonderful told 37-years-old driver holding trophy in his hands.

Lacko’s Sunday was almost the same. In the main race after start from fifth position he held it till the end. In the second race with top 8 in reversed order he soon took third position. Then he again overtook young Hahn and beyond Anderson he scored another second position in front of Czech fans.

Two second places. Points are at the base, car is not broken. We can be delighted with Most race weekend. A lot of spectators have come. At the first chicane I always heard huge noise from tribunes. Lacko was happy that people were at the races again and reduced his loss to third-placed Sasha Lenz to 26 points.

His team mate Teo Calvet could be also delighted. And he has very similar weekend as Adam did. For 21-year-old Frenchman, it meant victory in the Promoter’s Cup, and then suffering with a damaged rubber or hard contact with opponent.

Buggyra Academy’s driver was the most happy after Saturday’s main race, in which Calvet finished fifth overall. He enjoyed the race. It was a big fight each other with Anderson the whole time and in the end he managed to overtake his rival in the fight for the victory in the Promoter’s Cup. It was a very fun, stated the satisfied racer.

In second race of the day he had a puncture almost from the start, his tire even exploded at the end. But he was again lucky on Sunday. Calvet also shined in the main race. He won the Cup standings and finished sixth overall. Start was full of contacts, he was able to move one position ahead. Till the finish he enjoyed the race.

But he didn’t have so much joy on Sunday afternoon. He was hit again. Although it was not defect, the Frenchman found himself off the track and lost several positions. But it couldn’t change anything on his first position in Promoter’s Cup. He leads Anderson by eight points.