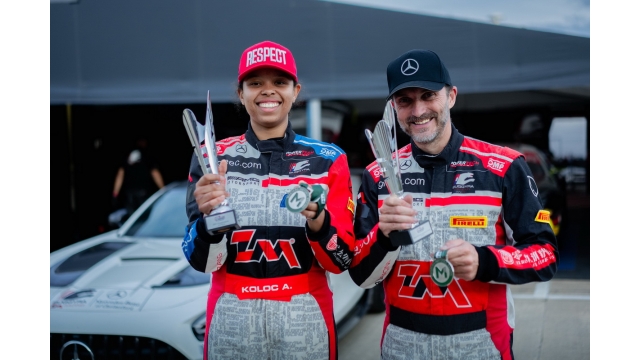 The Mercedes-AMG GT4 drivers took part in the Masters GT4 Classic Silverstone Challenge, one of the UK’s largest gatherings of sports, touring, and formula cars from the past and present. “The whole event was great. I had two races where everything worked well, so I took home the trophy for third place. As a bonus, I got to see a lot of beautiful and famous race cars,” Aliyyah Koloc said about her weekend at Silverstone.

The foundation for success was laid in qualifying where David came third and Aliyyah fourth. “I’m really excited about my first event at Silverstone. It’s a popular and well-known circuit that I’ve never driven on before. We had our first dry run in qualifying. Every run here is an experience,” said David Vrecky who replaced Yasmeen Koloc, still recovering from an injury sustained some months back at a race at Spa-Francorchamps.

On Saturday, the two-time European track champion claimed third place in the GT4 class, with 18-year-old Aliyyah Koloc finishing just behind him in fourth. “I got off to a good start from third. I wanted to overtake the car in second place and managed to do so in the first and second corner. Then, however, I made a mistake in the next corner and dropped back to third. Halfway through the race, I had a small issue with the rear tyres and had to slow down a little. I’m really happy with the result. It’s a great honour to be on the podium on such a circuit,” said David Vrecky.

Sunday’s race for a long time seemed to be a carbon copy for both Buggyra drivers. David Vrecky held on to third place, with Aliyyah Koloc being right behind him. But on the last lap, he couldn’t keep his race pace due to worn tires, so Aliyyah Koloc got ahead of him and took home the trophy for third place.

“Sunday’s race was more interesting than the one on Saturday. I was battling with the McLaren for the first three laps. He passed me on the first lap and we had a small contact. But I managed to get back past him and then the safety car came out. On the final lap, I caught up with David and passed him to come third and be on the podium,” said a very happy Aliyyah Koloc.

“I pushed as hard as I could from the start. But towards the end, my tyres overheated and it was difficult to keep the car on the track. In the penultimate corner I went a bit wide. Aliyyah took the opportunity to get in front of me immediately,” the experienced racer described the change of positions of the two Buggyra ZR Racing Mercedes.

For Aliyyah Koloc the Silverstone Classic was a good preparation for the EuroNASCAR event which is scheduled for the upcoming weekend at Buggyra’s home track in Most.

“We have done a great job as a team. We have achieved many of the goals we set ourselves. We collected data, continued our driver education program, and every day our cars got faster. In addition, we welcomed a new partner from the UK to the team, the AMG Mercedes dealership at Cheltenham,” said team boss Martin Koloc on Buggyra’s Silverstone debut.